Garth started out his career in the banking industry working for First Security Bank after getting his degree in business at SUSC (now SUU) in Cedar City. His 19+ years here gave him extensive experience in financial services, making over 10,000 loans during his time.

While Garth enjoyed the banking industry, he managed several rural branches throughout the state which required a decent amount of travel for him and his family. He longed to eventually come back home to Cedar City and settle down there for the long haul. Finally, in 1989 the right opportunity presented itself. 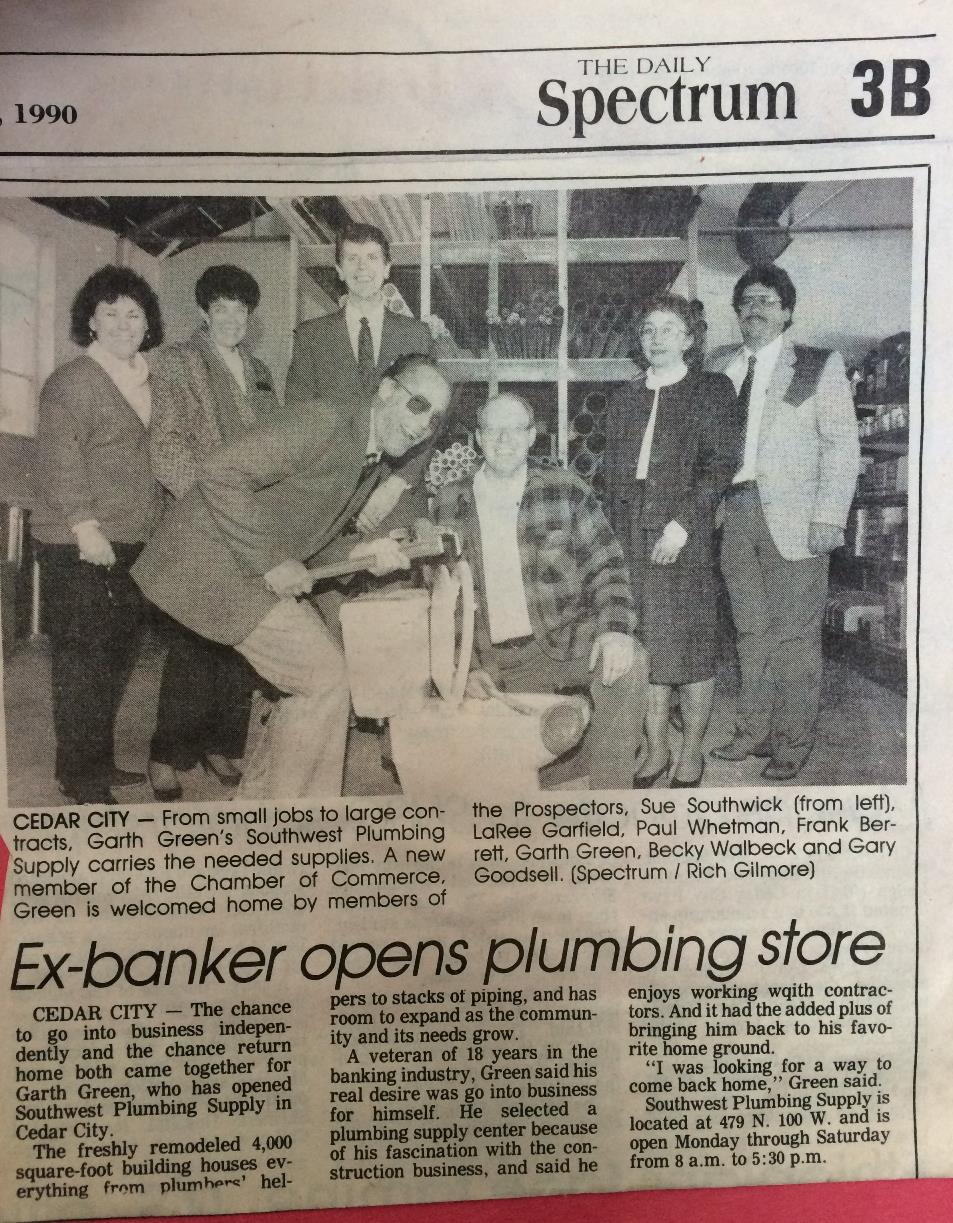 Over 30 years ago in 1989, Garth opened a small plumbing supply company on 100 west in Cedar City called Southwest Plumbing Supply. The year he started his business there were only 7 building permits in Cedar City, including his own home. Obviously, that environment was not the best indicator that a plumbing supply company would succeed, especially when another supply store also sold plumbing supplies. However, Garth and his wife Wendy believed in the future of the city and committed themselves to sticking it out for the long haul.

The city grew, and with it so did Southwest Plumbing Supply. Today, even though most of the company's business is done outside of Cedar City, Garth has chosen to keep most of the operations local and 150 people are still employed in the city. The business allowed Wendy and Garth to raise their children and teach them about small-town values of hard work, faith and trust in God, and the value of family. 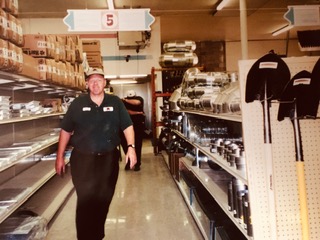 Around five years later, Garth realized an opportunity to fill the demands of an ever growing need for reliable and efficient fireplaces, stoves, furnaces and Air Conditioners. In 1995, Cooling Heating Supply in Cedar City was born. Since then, Cooling Heating supply has serviced Iron County and surrounding areas with HVAC supply during both the long harsh winters and dry hot summers.

That makes two separate companies founded by Garth that have each contributed to Cedar City and its residents for decades. Though Garth initially had no experience in the plumbing/HVAC industries, his relentless work-ethic and resourcefulness allowed him to succeed. He has a true entrepreneurial spirit, one that will not be deterred by potential roadblocks.

Both of these companies illustrate one of Garth’s main priorities, which is to grow Cedar City through economic development and jobs provided. Whether he’s given a summer job for a local high schooler looking to save up for college or full-time employment for a father or mother looking to provide for their family, hundreds of Cedar City residents have found employment through the business that Garth has created.

Garth and his wife Wendy are honored and humbled to have been able to play a part in the economic growth of Cedar City. They recognize that this city has been so many things to so many people and they want to protect and preserve that ability for generations to come. As mayor of Cedar City, Garth will continue to emphasize and produce growth as he has done for years.

A Trial of Faith Over Fear in Brazil

No one understands what gun violence really looks like better than Garth O. Green, who, on a rainy night in Rio de Janeiro 20 years ago, found himself facing down the barrel of a gun after turning onto the wrong freeway ramp. 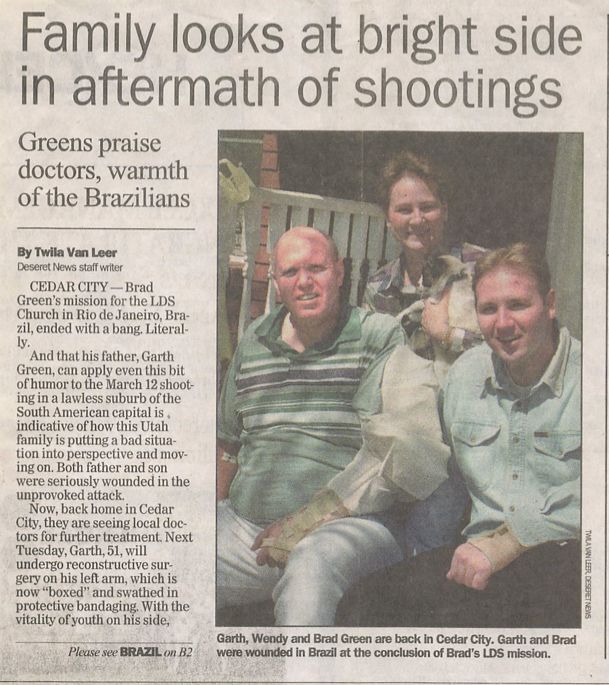 Garth was there to pick up his son Brad from missionary service for the Church of Jesus Christ of Latter–Day Saints. As they traveled back to the capital after visits to some rural areas in Brazil, two unknown gunmen forced Green's car from the road and opened fire.

Garth awoke in a hospital in Bom Sucesso, Brazil, to a doctor cutting through his abdomen and puncturing Garth’s right lung to drain the blood that had pooled there after a bullet had passed through. Garth recalls how precious oxygen seemed as the pressure in his lungs slowly receded. Both arms had also been shot, his left arm completely shattered. It is a miracle that they not only survived, but that Garth managed to speed the car away from the assailants and get his family to someone who could help them.

Even after this harrowing experience with firearms, Garth understands the absolute need for Utahans to have the ability to legally purchase and use guns for sporting, hunting, and to protect their families if necessary. He knows first hand that gun violence should not be taken lightly, but giving people the chance to make their own choices is the best way forward.


To read Garth’s detailed account of this event CLICK HERE
Brad's write-up of the story HERE
See news reports of the incident below: 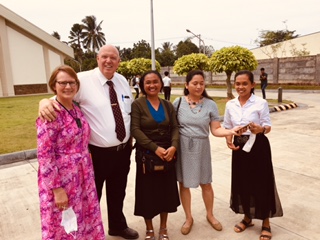 Garth’s decades of plumbing experience came in handy later in life when, as a missionary for the Church of Jesus Christ of Latter–Day Saints, he traveled the globe working to create practical sources of safe, usable water around the world.

More than one eighth of the world’s population doesn’t have access to clean water. LDS Charities helps solve this issue by building water and sanitation systems in communities that need the help.

s part of this initiative, Garth worked on three different continents to evaluate the water needs and work with engineers and humanitarian missionaries to create modern plumbing systems that could last long-term, solving the water crises in those communities for years to come.

Garth is ready to bring this same expertise, goodwill and tenacity to the problems facing the citizens of Cedar City.

Paying it Forward and Passing on Life-Changing Skills 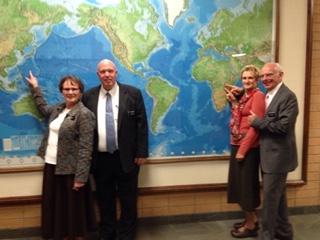 Starting a business and managing finances smartly is no easy task. After building two businesses of his own, Garth has some idea of how tough it is, and how to do it the right way. That’s why Garth spent several months working his way through Europe to teach business skills to people in England, Ireland, Scotland, Wales, Spain, Portugal and Italy.

All told, Garth taught nearly 1,000 hours of classes on successful self employment. These courses gave more than 500 students the confidence to move forward in their careers and build a future for themselves and their families. 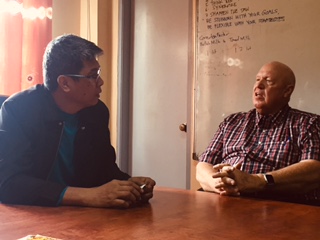 Additionally, Garth taught self-reliance classes in the Philippines. After spending a few days with his students, he realized that their concerns did not stem from a lack of financial knowledge, but from a lack of jobs to get a reasonable cash flow going. In answer, Garth started yet another business right there in the Philippines, creating high-paying jobs for hundreds of people.

This philosophy permeates everything Garth does––if he sees a problem, he rolls up his sleeves and goes to work until it is solved.

A Legacy of Love 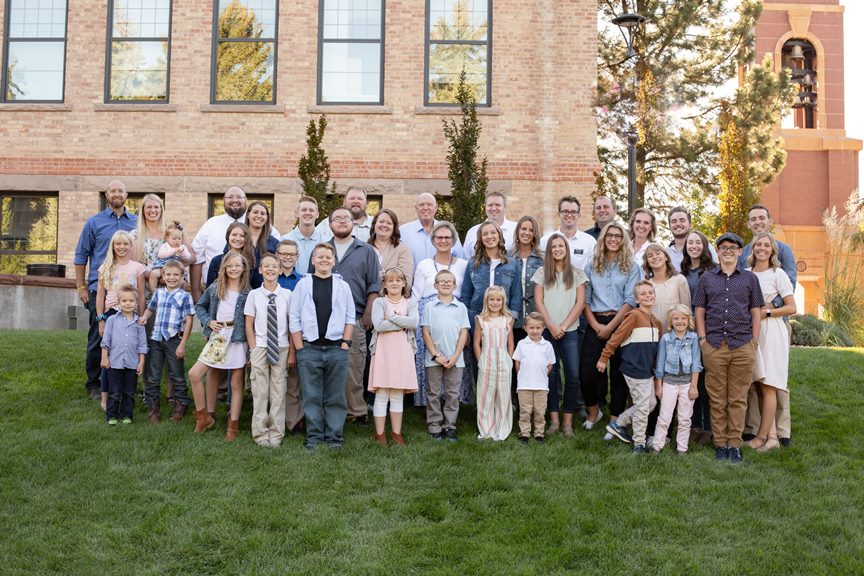 Garth and his wife Wendy were married in 1971 after meeting each other at an SUSC dance right here in Cedar City. While they moved around the State of Utah for work for several years, they never wanted to live anywhere other than Cedar City. So one day, Garth went in and quit his job in order to relocate his family back to this amazing city. It was worth every risk and sacrifice.

Celebrating their 50th anniversary this year, Garth and Wendy have come a long way. Their daughter and their four sons are their pride and joy, and they love to come together as a family, which now includes 25 grandchildren and one great-grandchild!

Garth’s family is proud of the legacy their father and grandfather has created, and is excited to see him apply the same leadership and love as mayor of Cedar City.

T-Bird, Through and Through


Garth earned his way through school working at First Security Bank. At first, he helped manage the first-ever computer installed at the building (they had to remove one of the walls to get the cumbersome machine installed!). Due to his hard work and dedication, he worked his way up the ladder to become a loan collector within a few months.

Because of his job with the bank, Garth wore a suit and tie to every class he attended. He became very popular with the other students when he started offering credit card applications to his peers.


When he wasn’t working, Garth spent his time at SUSC earning a bachelor’s degree in business administration, which would turn out to be vital to his successful career.

Donate to help with the campaign: